On-time for the occasion, team EvoLogics is happy to present the PingGuin, an autonomous underwater vehicle with low-drag bionic design. The vehicle was developed as part of the MUM (“Modifiable Underwater Mothership”) collaborative R&D project and was first demonstrated in Kiel, Germany, in June 2020.

The outstanding hydrodynamic properties of a penguin’s body became the starting point for the AUV design within the NaviMUM subproject, assigned to EvoLogics.

One of the EvoLogics co-founders, Dr. Rudolph Bannasch studied Adélie penguins and the effectiveness of their locomotion since the 80s, undertaking several field trips to the Antarctic and performing numerous wind tunnel and water tank experiments in Berlin. This research demonstrated that spindle-shaped flow bodies, modeled after penguins, achieve ultra-low drag coefficients in the water.

Hence, the design choices for the vehicle’s components were directed at maintaining the shape and contour of an idealized penguin-like spindle to maximize the drag efficiency, so the AUV has very few protruding parts that affect its hydrodynamic performance. 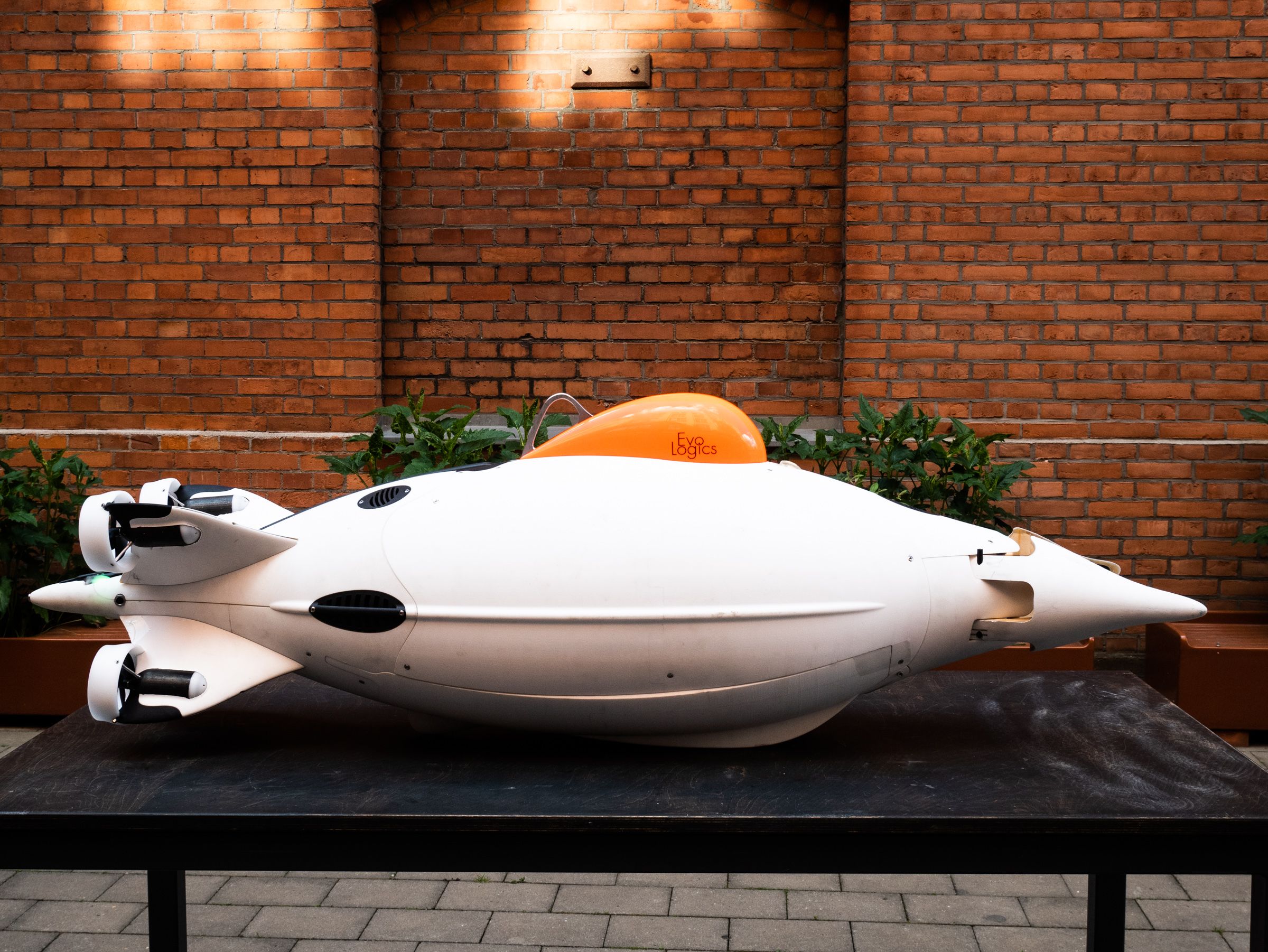 The NaviMUM PingGuin is intended for use as a multifunctional communication node. It would operate in a self-coordinated AUV swarm that enables adaptable positioning and communication scenarios for the MUM system. Each vehicle carries a built-in streamlined EvoLogics USBL modem for underwater data transfers and position estimations, the modem features an integrated atomic clock for precise synchronization of the acoustic network. The AUV’s surface communication module comprises Wifi, Radio and GNSS with a combined collapsible antenna (and an optional Iridium/GSM modem).

The propulsion system includes 4 horizontal thrusters in X-shaped configuration and 3 vertical thrusters for maneuverability and speed, and the vehicle is able to hold position and hover in the water column. 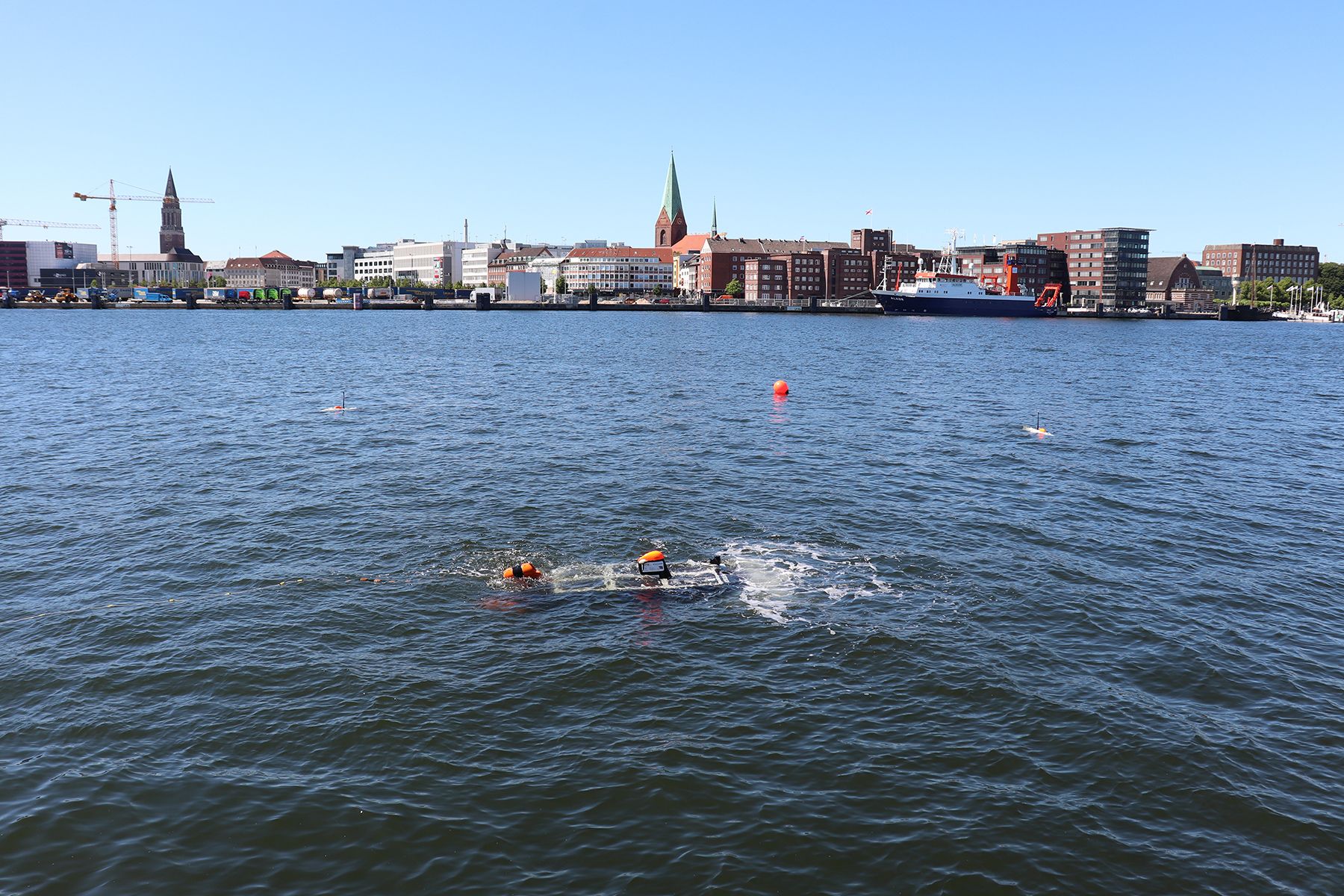 Within the MUM system, a group of PingGuin AUVs is designed to form a flexible and adaptable acoustic network. When hovering, the AUVs can form a relay to transfer data from mobile or stationary MUM modules. A PingGuin can operate as a surface node and transfer data over WiFi, radio, or optional GSM to a support vessel or a shore station. With its GNSS antenna and an acoustic modem, the surface node can perform geo-referencing of other underwater assets deployed within the modular MUM network. For operations that require accurate LBL positioning, a group of PingGuin AUVs would use the anchoring function and become seafloor nodes performing as the LBL baseline. Using AUVs as LBL baseline would eliminate the need to recover seafloor nodes when the LBL coverage area needs to be repositioned.

The PingGuin’s basic functions (mobility, communication and positioning) were tested in tank and open-water trials and presented at the MUM project demonstration in Kiel. Team EvoLogics is now finalizing the advanced functionality of the AUV to conduct further trials.

The MUM (Modifiable Underwater Mothership) project is coordinated by thyssenkrupp Marine Systems and funded by the German Federal Ministry for Economic Affairs and Energy. MUM is a collaboration between industry and science since 2017, and the partners are thyssenkrupp Marine Systems, ATLAS ELEKTRONIK, EvoLogics, University of Rostock, and Technical University of Berlin.

MUM is envisioned as a new class of extra-large modular unmanned underwater system for various applications in the civil maritime industry, such as transport and deployment of payloads and exploration of remote areas. The June 2020 demonstration in Kiel presented the results of the collaboration’s research on feasibility, usability, construction and operation of such modular underwater vehicles.